This one has been cropped to the final size and scanned in, rather than the snapshot from before. In an endeavor to keep on growing I’ve also taken this into Photoshop for some minor adjustments. Can you spot them before you read on? 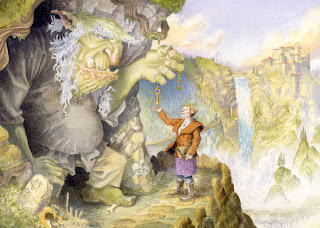 After living with the painting for a little while, it became time to scan it and get digital. Those who may know my previous work, will know that I am a bit of a “Ned Ludite,” and have pushed off the computer for some time.
Having read others’ posts and listened to some arguments regarding the computer and it’s place in the illustration process. I think that the argument that really sold me on it was the fact that in today’s world, illustrations are ultimately digital at some point. That being the case, why then give away what control you as the illustrator have in that process. When one scans their own piece, you are able to modulate the colors (and hope that the recipients computer monitor is calibrated something similar to yours!,) and make any final adjustments before sending it off, i.e. Digital Corrections.
For those of you at home who’ve been playing along and tried to spot the changes, I’ll point some out for you. Firstly, and most importantly, there is the elf’s face. I was really disatisfied with how the painting turned out, and wanted her to be more ingaged with the troll. So, I’ve changed her eye as well as tried to build a bit more structure under her face. This being the first real attempt, I am not totally convinced just yet. It’s a good start, but there is certainly room to grow.
Other changes are way more subtle. I’ve tried to accent the top of the Troll’s head to pop it away from the cave wall. Of course there was the clean up from the muliple scans, edges needed to be made invisible, and there were actually some cat hairs that mysteriously appeared (he said as he casts a sideways glance at the peacefully sleeping cat.) That’s about it.
Troll painting… Done.

PS: there are a whopping 8 posts that chronicle the creation of this piece, to see the first moves check out Post #1: Fantasy Series
to see the previous post about this image go to Post #7: Troll, The End