This project was done in the middle of 2008. I thought it’d be a nice opener for the blog.
This image was created to be a gift for my wife’s Kumu Hula (or Hula Master-Teacher) Patrick Makuakane. In Hula there is an important connection that is formed between the teachers and the students. In honor of that lineage that is passed down through the generations, the image shows Kumu Robert Cazamero and Kumu Auntie May Klein who were both Patrick’s teachers and provided him with much inspiration.
Having decided on the subject, I first worked out a drawing through thumbnails, which resulted in this drawing. 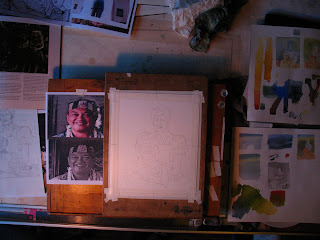 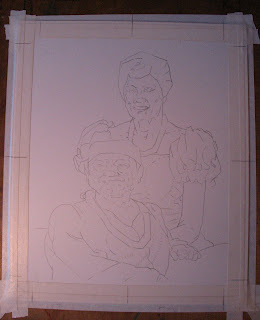 The next step was to put in the initial washes. Warmer tones were used for the Robert Cazamero, and cooler tones for Auntie May Klein to show that Robert is in the present tense, and May was in the past. 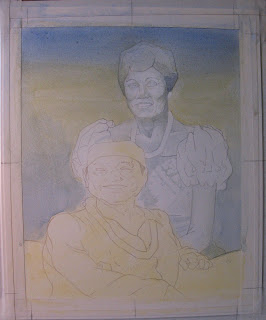 Now the painting started to take off, and detail was added. This is the really fun part! First I worked the foreground then the mid-ground, all the while developing the background. 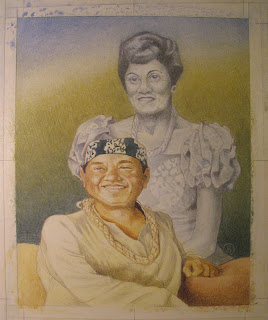 As the painting came to a finished state, it looked like this. 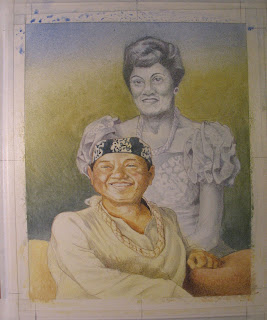 This is where it gets interesting. When a painting is to that finished state, there is usually a time where I just look at it. For this purpose I have a little easel. As I was bringing the painting back into the studio to prepare it for delivery, I had in one had the little easel, and in the other hand a glass of pomegranate juice (which I love so much.) It was like a slow motion scene in a movie, the board began to fall off the easel, and I reflexivley reached to catch it with my other hand… the one with the juice in it.
A period of time passed where nothing but profanities spewed forth.
I then got onto the task of recovery. With less than 2 hours to go before it was to be presented a good portion of the painting was sliding off with the pomegranate juice. There are moments in life where our past comes back to us and it seems as though it had been for this specific reason, to right now aid us. And this is the case with my first job out of High School as a photo retoucher (yes in the era known as PPS, Pre-Photo Shop.)
As my wife came home and prepared for her class, I wearily walked up with the painting, no worse for wear, juice all blended in and no-one was the wiser… until now!