Finely, the Troll image has made it onto the board! The next step will be painting, which can be a hair raising experience. This all took a little extra time due to a family emergency that came up. Now things are in order, and we’re getting back on track. It’s all part of the process.

The color study proved to be quite useful. It’s done at about 25% of the final size. There were a number of smaller issues that either got worked out or became obvious that they will need to be worked out in the final. 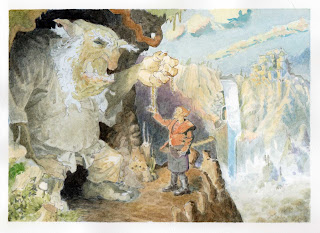 As the painting was happening, I noticed a few items that hadn’t shown up in the value study. One is that because I dove in for the darks first thing, the Troll’s left foot all the sudden became the center of interest because of the strong value jump. Not that it’s not a foot worthy of attention, as far as Troll feet go, it’s a pretty nice one, bunions and all. But it ain’t the center of attention, which I want to be the key hanging from the Troll’s hand.
Another ‘Key Issue’ (oh hardy har har) is that the values are backwards between the key and the background. The key needs to be dark and the background needs to be lighter.
The biggest issue that there is the shadow shape behind the the elf. It meets the cliff that she’s standing on, and is really odd. It is too flush and creates an unintentional tangent. That’ll have to go.
Over all, the colors are in order, I’ll just have to take care that the values are correct. I really want the sense of depth between the foreground and background. If all goes according to plan, the middle ground will be atmosphere.
Well, now, that brings us right ’round to the final painting. Right now I’ve transfered the drawing on to final board. I like to use a 500 series Strathmore plate finish bristol board. It’s nice and thick and holds the watercolors well. It also dries flat which is great later on when it comes time to scanning and such. 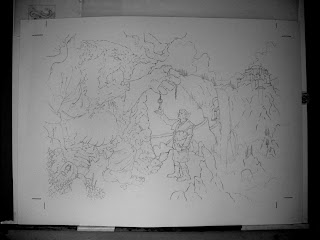 PS: there are a whopping 8 posts that chronicle the creation of this piece, to see the next moves check out Post #4: Have a Spare
to see the previous post about this image go to Post #2: Troll Time

← Troll Time
Have A Spare →