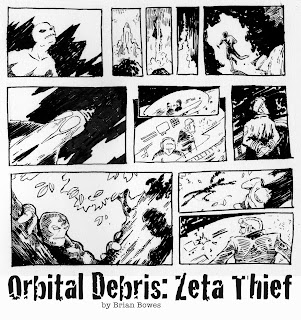 While waiting in a Doctor’s office, some people read magazines while others knit. This comic page was waiting for me while I waited. It’s a self directed comic, I was surprise to watch it emerge from my sketchbook. I didn’t know it was in there, but here it is.

Comics are a great way to work out that narrative image making skill, with the addition of time. I’ve noticed that in, what I see as successful, single image pages the viewer can get a glimpse of what just happened, or what will happen, alongside what is happening in an image. With sequential art, there’s all kinda space to play with time, place, as well as core story telling ideas like foreshadowing, metaphor and so on. Of course books have been written on the subject of comics and how to read and draw them, so I’ll hold back the diatribe on comics… for now.
As I continue to delve into the world of comics {who knows, maybe there is work for me in the industry yet,} and develop styles and so on, I have to give a tip of the hat to some of my heros: Barron Storey, Bill Sienkiewicz, Sam Keith, John J. Muth, Jeffrey Jones, Berni Wrightson, and Stan Sakai. Each is a hero for different reasons. If I were to grossly hack these select few into groups, I’d have to say that Barron, Bill, and Sam would have to go into a bag labeled, “Freakishly Great Art and Story Telling.” The remaining fellows could be slapped with a label that read, “Stories and Drawings to Make Angels Weep.”
This piece leans on lessons gleaned from Barron’s classes, and tries to refine and incorporate the graceful inking of Jeffery Jones or Berni Wrightson. Having said that, I’ve got a long way to go!

← In the between times
Dorothy, as she is →