Over the last few months I have been listening to the unabridged Blackstone Audio of Moby Dick. Along the way the story has seeped into my thoughts and drawings. I present to you some work that I made along the way. As it turns out, I am a little obsessed with illustrating stories. Hmm, perhaps there a metaphor lurking somewhere under the churning waters?

The book is unequivocally a masterpiece. Throughout the story I was absolutely riveted, wide eyed, with my imagination reeling. Catch me at a party and I will happily expound on this for you! In short, it is awesome, and I mean that in the traditional sense of the word. I am in awe of Moby Dick. At another time, I will get myself a copy of the actual book, perhaps with Kent Rockwell’s illustrations in it, and read it from tip to tail.

The Ahab piece started as a watercolor demonstration for a workshop that I gave at the Santa Cruz Art League on children’s book. Sure, I think Moby Dick would make an amazing children’s book… why not? 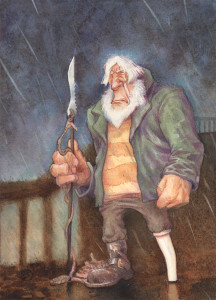 During the workshop I only made it to the underpainting stage. Then I brought it home and continued to work on it while I had breakfast over the next day or two. 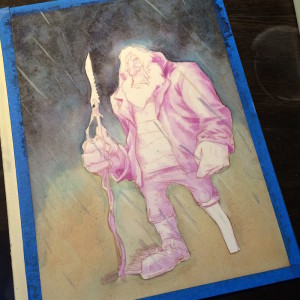 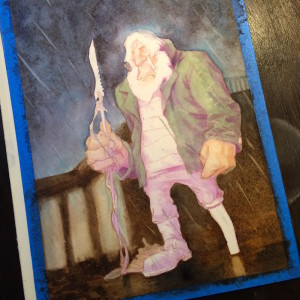 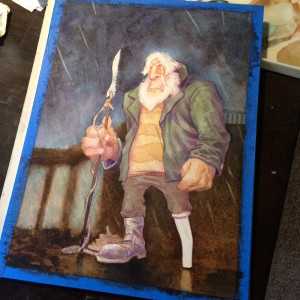 Ah, a face only a Mother could love. I have to admit I had a bunch of fun with all the rain bouncing off his head. 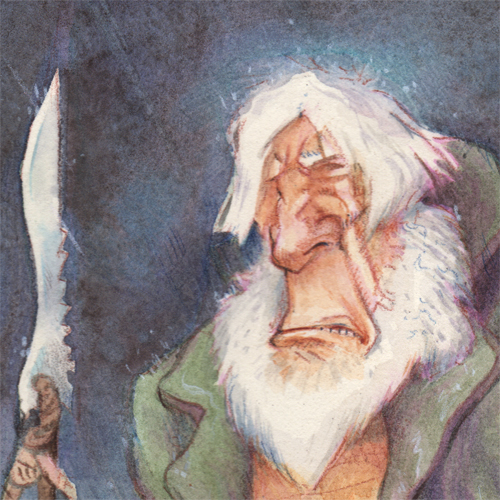 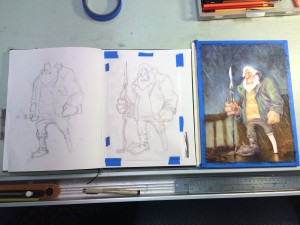 I continued to do character sketches in my sketchbook. These two, Starbuck and Stubbs, are Ahab’s first mates on his ship the Pequod.

After finishing the book, I have now adopted Ahab as my Patron Saint of Illustration. Like him, I pursue a career that’s obsessive bordering on monomaniacal.

So, now I ask you, what’s your white whale?

As ever, thank you for reading. I respond well to enthusiasm, so feel free to leave a comment here, drop me a line, or follow me on the Insta-tweet-a-books.

Summary: Up coming comic book workshop in Santa Cruz I’m really excited to start the year off with a workshop at the Santa Cruz Art League! The workshop is called Micro-Comics, Maximum Fun! and you can sign up through the SCAL.org website. (scroll down to the workshop title and register from there!) Here is the quick pitch… END_OF_DOCUMENT_TOKEN_TO_BE_REPLACED

Sometimes I get carried away while drawing. This s

A bit of process work from the recent Grom paintin

Excited for the finished painting of Grom? It wa

It’s been fun moving back into painting again. O

Grom is just as excited as I am watching the World