This is an ongoing project that will be end up being 2, maybe 3 paintings. They will be based on an imaginary fantasy story of my own concoction. Essentially, the story is about a princess who strikes out on an adventure to save the King, who has had a magic spell cast upon him that is poisoning him. Up to now, she has had to escape the castle, learn the antidote, get the antidote from a dragon (what fantasy story is complete without a dragon! Watch for future posts on this image as well,) and at the end she has to sneak back into the castle. To sneak back into the castle she has to out wit the Troll who guards the hidden entrance under the waterfall, and holds the key to door.

As I went through the numerous thumbnails developing this drawing I finally came upon a setting that I liked, and that told the story. After I had a thumbnail version, I invited my friend Lauren over to do some photo-reference. Here, I’d like to put a shout out to Pat over at P•Kok, a local clothing boutique who specializes in natural fiber clothing. Pat was very kind and allowed me to borrow a few pieces for the photo shoot. Please visit her shoppe and buy lots of groovy stuff! www.pkoksf.com or on Yelp: http://www.yelp.com/biz/p-kok-san-francisco 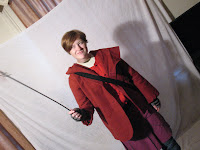 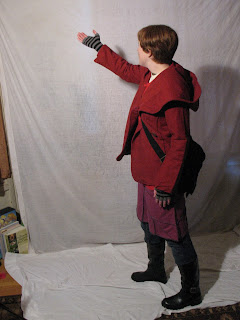 After I’d established a design that I liked, the image is brought to a final-ish drawing. I had some fun developing the Troll. At first he was a kindly forest spirit who would move the waterfall with magic. But the more I looked into Trolls, the more I realized that this girl is lucky not to be eaten! So, this incarnation is a real snotty, grumpy, bastard, and I kinda like it better that way. Who wants a nice troll anyway?: 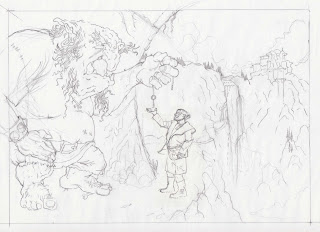 And from there is developed the Value Study: 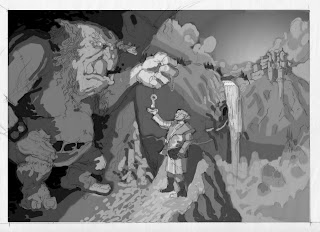 The next step is to transfer the drawing onto the final paper where I’ll make a watercolor out of it.
STAY TUNED!

PS: there are a whopping 8 posts that chronicle the creation of this piece, to see the next moves check out Post #2: Troll Time