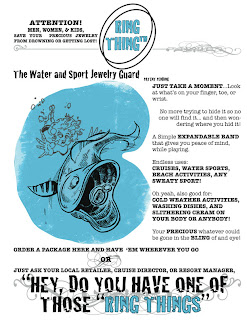 One can never tell where things are going to go next! A friend of mine has a mother whose something of an entrepreneur. We were introduced to each other last year and she hired me to do some simple story boards for a PSA for her company No Kiddin’ Condoms.
This year, she was on her way to an event where women inventors compete. As it turns out the designer she thought was going to prepare her ‘pitch poster,’ basically flaked out on her, and in a panic she called me up. My solution was quick and dirty, I figure it took me about 7 hours from beginning to end.
I don’t suppose this will turn the world of illustration and design on its ear, but I am happy to have been able to pull it off, get paid, and have it look not half bad.