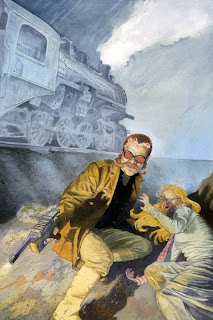 Recently I had the good fortune to paint the cover of Steampunk Tales #6. It so much fun to work in a genre that I really dig. I like to describe Steampunk Tales as a ‘Digi-pulp.’ They are really taking a great format that has propelled so many story tellers and illustrators forward from the past, and bringing it into the 21st Century by making it accessible to so many tech platforms. Sort of a past future in the present, much like Steampunk.

{ I’ve posted links at the bottom of this post where you can go to download the latest issue, please check it out! It’s a lot of entertainment for just $1.99}

I really enjoy Pulp action and drama, and may have really started my romance with them after reading { and by ‘reading’ I mean ‘mostly looking at the pictures,’ } “Bradbury: An Illustrated Life, A Journey To Far Metaphor. Ray Bradbury was one of the first authors who really got to me. His work was a.) short, b.) rich with fantastic imaginings, and c.) just down right beautiful. I’ve been in love with his works since I was in my single digits. Moving forward, what I saw in this book was how he got his start through pulps and fanzines. Of course, next to each one of those stories were fabulous, bizarre, and wonderful illustrations. Many of those illustrators went on to have full and rich careers, but, in the beginning they were doing it in a spirit of adventure and a love of the stories. I don’t mind saying that here too, in this same spirit, I wish to send down a tap root in the hopes that my works will, over time, blossom and bear fruit.

I like to share the process of how these images come about. I have to say right up front that I didn’t document a lot of steps on this one, but what I have is here.

I guess what really got the ball rolling was a note from the editor that connected me up with the writer G.D. Falksen, whose authored a series entitled “An Unfortunate Engagement.” He briefly described an scene wherein the Hero, Heroine, and Sidekick are liberating slaves from a Siberian airship factory. Already I was drooling, there is just so much to work with here; giant airships, explosions, narrow escapes… ahh the stuff that pulps are made of!

The first take that I was ready to settle on { there were many that ended up on the cutting room floor } was one that showed the Hero charging at the front of the masses, grit in his teeth, and explosions all around! I described it like this in the email: “Take 1: Our intrepid trio crests a hill ready for more action as the giant airship burns to the ground in the background. Airships! Ray guns! Action and Adventure!” 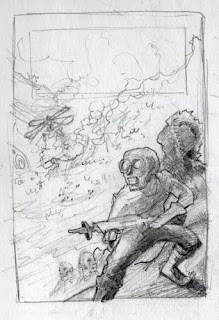 As I continued to work over what was going on, I wanted to leave more for the imagination of the reader. Some of my favorite works of art allow the viewer to access what’s going on. This can be done in an infinite number of ways, the way I chose was to allow most of the action to be “off screen” and to focus on the Hero and Heroine. The second sketch was discribed thus: “Take 2: The faces of two of the Intrepid Trio turn to face the explosions from the airship factory below, they are illuminated in crimsons and orange. Above them a Steam train waits to whisk them to their next adventure! Explosions! Narrow Escapes! and a Train bound for Adventure!” 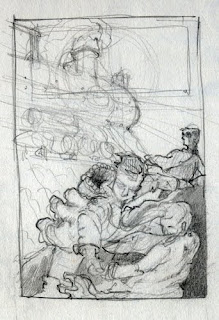 Some other smaller details that I enjoy are a sense of timing. To name sources here, this comes from at least two different places if not more. The first would have to be “Drawing Comics The Marvel Way” where there’s discussion of dramatic action and the example is drawing someone throwing a punch. The gist of what they said is that showing the moment just before the action or just after the action creates the highest drama. The second source that came to mind { and this is where you’ll have to bear with me as I geek out a bit } is in the book ” The Art of Jeffery Jones.” Now, the image I am talking about is actually a painting by Harvey Dunn, which is shown as an early painting influence. The image shows a man sitting in a barn window with a stern look on his face, now it took me a while to put it together, but there’s this wonderful wisp of smoke just above his rifle… AH HA! I thought, “he’s just fired his gun and his expression is in reaction to that.” Now that’s the kind of timing I’m talking about, “What just happened, What’s happening, and What will happen.”

I have to be honest here, and just say that I read as many books and look at as much art as I can, it all percolates around inside, and sometimes it comes out in strange and wonderful ways. You can see that in the final drawing here a few changes have been made from the sketch. One, the sidekick was dropped. I felt like the duo made a stronger triangle shape on their own. Two, you’ll notice that the gun’s come back… and there’s that smoke. 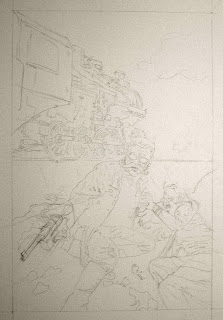 I also like the train in the background, because for me it gives a sense of ‘future’. In a way, the past is where they’ve come from, the present is him shooting into the bright light of an explosion, and there, just over the rise, Ol’ #6 waiting to take them to them into the future. Next stop.. ADVENTURE! 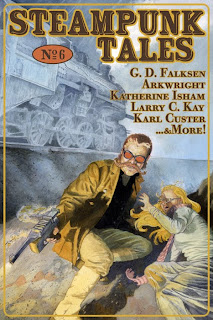 The new issue is out now, so please check it out and download it. For the low low cost of $1.99, you could have some great fiction, and fun art!

Please email me directly if you are interested in purchasing a giclee print of this. {here}

To see other Steampunk inspired works by yours truly {Steampunk Made The Old Fashioned Way}, also {Dorothy: Then A Strange Thing Happened}

Books mentioned in this post: {Bradbury: An Illustrated Life}, {How To Draw Comics The Marvel Way}, and {The Art of Jeffery Jones}

← Alien Moon Phases
Figuring It Out, One Drawing At A Time →

One Response to Ol’ #6: A Past Future In The Present