Summary: In a rush to submit work for an upcoming SCBWI conference, I share my process of painting Ichabod Crane, which was developed over the course of a week.

I’ve been developing my own adaptation for The Legend of Sleepy Hollow in preparation for the upcoming SCBWI LA conference in August. There will be an workshop for Illustrator/Writers called a “First Look.” This my fledgling foray out onto the winds of storytelling, although those who know me, will know that I do love telling some pretty windy tales!

Earlier in the process I started with a bunch of character sketches, then analyzed the original story so that I could put my own twist on it and still retain its original structure.  One of the requirements for this First Look was to have the characters in a scene from the story. The moment that I have chosen is that fateful night that Ichabod meets the Steam-powered Automaton (or Headless Horseman in the original.)

Before we left for what would turn out to be an AMAZING vacation, I did this thumbnail and concept for the image.

Some of the things that I really liked about this image are the circular flow around the piece and the owl. I like the sense of  impending doom, and that Ichabod is distracted by the owl. This general idea remained through to the finish.

After we got home I realized that I had like a week to get my work in and freaked out. So what followed was me working my way to a finish as quickly as I could. One of the first major changes to happen was the move to a horizontal format. I changed my mind, and decided to move from a story book format to a 32 page picture book.

As a side note, if you’ve been following me on Instagram or Tumblr you may have already seen some of these images.

From this rough, I continued to develop the idea into a little more realized drawing.

After this point, I started to do a little research into horses and following a tip that I got from Laura Innes, of the Paperwings Podcast, was to start using a mirror in front of me to work on the character’s expression… it definitely helped.

One interesting note is that our dog, Radar, was something of a model for the horse’s ears. Not bad for a little Chiweenie!

Here’s a snapshot of the final drawing, the dappled light is from outside.

From here it was ON, I had about 4 days to get this painting done. I love a little challenge.

I did use my recent discovery which is basically the watercolor version of a grisaille technique. I have to point out here, that paper plays a HUGE role in watercolor. In the past when I’ve used this technique I’ve used a hot pressed paper, and it worked exceptionally well, for this painting I opted for a Strathmore 500 Series Bristol Board with a Plate Finish. Painting on a plate finish is a little like painting on glass, the advantage to this paper is that the colors just bang off the page and you can get razor sharp edges, the downsides however are that it’s really hard to get a soft edge and because the pigments mostly sit up on top of the board it is really difficult to wash over something without lifting up the pigment below. As a result of my choice of paper, I really had to battle this painting. If I get to do this over again I will choose the hot press paper.

One fun thing that happened as I developed the painting is that little details started occurring naturally on the page. You can see on this image that there start to appear little nocturnal eyes here and there. Then as I was finishing it, I started to get the sense that I wanted some dappled shadows behind Ichabod. Now, it may have been that I’d been listening to HP Podcraft for nearly 8 hours straight, but the idea for a creepy shadow hand on his back kinda magically appeared. I have to admit I rather enjoy that little note.

At this point, I knew it was done-ish but one thing that I’ve learned over the years, is to sleep on it. So, I have a small display easel at the end of my bed where I can set a picture. I stare at it until it stares back at me. 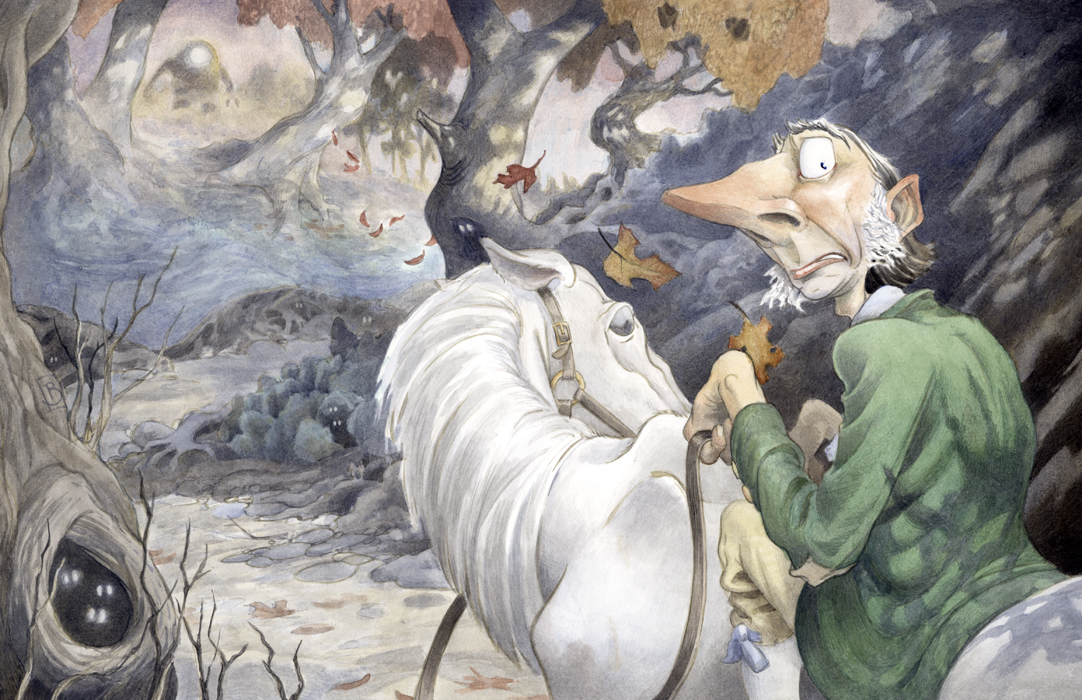 The next day I arrose, and spent another hour or two making final adjustments, then scanned it. I was pleasantly surprised at how little there was to adjust in photoshop.

As I rushed to meet the deadline for submission for the First Look, I jammed, put together some page layout thumbs for the whole book, rough synopsis, and the other character sketches into a PDF and sent it off. Technically the deadline was for 3pm, however the website just said on Friday, so there may be a little wiggle room. I got my work in by 4:50. Let’s just hope that it was close enough. Only time will tell, but I’ll update here if any news comes of it.

Post Script: As of Monday, July 8th, I did received notice that indeed my submission was received! What a great relief. I worked as hard as I could and now it’s out of my hand. Certainly there’s a benefit to having done the work in the first place, but I do hope that my work will be selected to be discussed at the Illustrator Intensive! Thank you all for your well wishes!

As ever I respond to enthusiasm, so please leave a comment, or ask a question. Thank you for following along on this wacky journey. 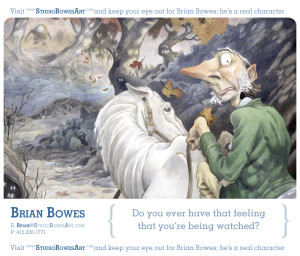 ← 3 Steps to a More Colorful Watercolor Pallet
5 Days in LA; Lessons from the 2012 SCBWI Conference →