A friend of mine commissioned me to do a pet portrait of her chi-weenie dog, Burt Wayne (aka Bat Dog.) She had seen some of the sketches that I was posting of dogs in costumes and wanted something similar for her little pup. 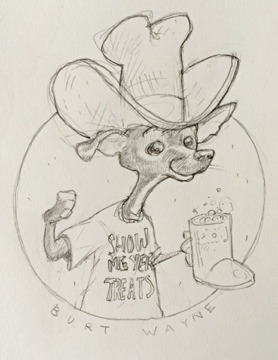 This character was sort of based on the Burt Reynolds played by Norm MacDonald in the SNL “Celebrity Jeopardy” skit. I’m partial to the “Show Me Yer Treats” shirt.

Good idea or not, Burt Wayne was named after Bruce Wayne… thus “Bat Dog!” So, on went the cowl and… here’s the painting process in pictures.

This whole piece was painted in watercolor, which can take many many layers to get some richer lights and darks.

In the is picture of the final piece, you can see the second sketch of Bat Dog off to the side.

← Suddenly!
The Story of the Fisherman Final Art Gallery →