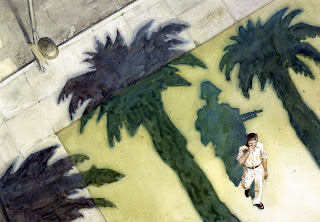 January has been a very good month, 2 book covers ~ DONE!

The past few weeks have been quite eventful. there was the Holidays, followed by New Year’s eve, sprinkle in t he social events, and you’ve got a busy month. Some where in all that, I made time to paint 2 cover paintings for the “Switchblade Series,” from PM Press. As I mentioned in my previous post , Santa brought me a great gig doing 2 book covers. I am happy to say that both covers are done and on time.

The books are stories that were outside the scope my personal work, and so I was challenged to come up with images that would be appropriate for the stories. The cover shown here is for The Chieu Hoi Saloon. The other image will be posted separately.

The folks at PM Press were very nice to work with, and they allowed me full reign on these pieces. In turn I did my best to deliver work that would be conceptually strong and technically well done. I feel good about both those aspects, but as always, there’s room to grow.

Here you can begin to see the genesis of the work. I submitted a couple of concepts that were generated off of the initial brief that was sent to me. The thumbnail I chose to use has strong graphic appeal, and speaks to the story with in. As I look at other cover artists whom I admire, I am often really attracted to work that, while based in the literature, resists being literal. This is not the contradiction that it may seem to be. My endeavor is to allow room in the image for mood and tone to creep in. Bearing all this in mind, I felt that this image would work the best. 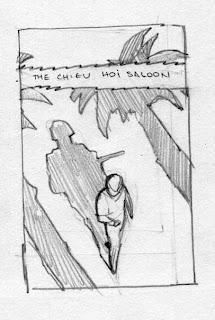 Next was to expand the image from just a cover image to a wrap-around cover. 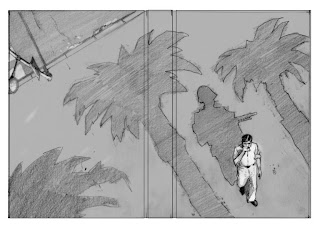 I struggled with a few things in this image. One was the gun in the shadow. For a long time I wanted to put something in the character’s hand that would possibly cast a “gun-ish” shadow. Then at some point, I remembered that this is an illustration, and not a photograph! It’s funny that I should have to give my self permission to do that, but hey that’s life. Another area that I worked on was the perspective, you’ll notice in the sketch that the street light in the upper left corner moves from the sketch to the final. I realized that if the guy is walking and casting his shadow that way that everything else in the image should be the same. In that way the internal logic of the image wouldn’t be broken.

I am very thankful for the opportunity to do these book covers and hope that it will lead to many, many more such wonderful gigs!

Check out the companion image: “Pike”