This is the second of the two book covers that I was asked to do for PM Press. Amazingly this piece was a great sounding board for the other piece The Chieu Hoi Saloon. Both pieces were a lot of fun to work on, and they provided a great point and counterpoint to work between. For instance this piece for Pike called for a cold harsh feeling, where as The Chieu Hoi Saloon required something warmer, although still gritty.

It was that “gritty” aspect that was one of the major challenges that I had to work with. Considering that often times watercolor, as a medium, tends to be softer and smoother. So, to build in some good ol’ Noir Grit was a challenge. With this piece in particular you’ll notice that I’ve spattered a lot of paint about, some to be the falling snow, and some to just be noisy on the picture plane.

Here is the progression from one of the initial concepts to final sketch. I was initially drawn to this concept for it’s graphic quality. I liked the stark tree as an emblem of this character’s family tree, that it would be desolate, broken, and dark, it’s seen dormant during the wintertime. While the story’s main character is actually Pike { for whom the book is named }, the character of the estranged grand-daughter, Wendy, is actually the epicenter of the story. She provides the touch stone between the main character and the mystery of his daughter’s death. You can read more about my initial thoughts from the first blog post here. 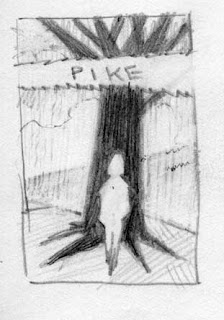 Here is the expanded final sketch which shows both the front and back panels for the book. I had some fun putting that little wispy weed at the bottom of the spine. That’s totally just for fun, I like books that have a tiny picture on the spine. Given the chance to do more book covers, I can see really pushing that tiny spine illustration. 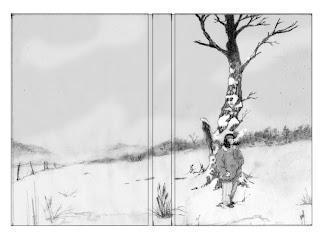 When moving from here to the finish, I knew that one aspect that I wanted to show in both this and the other cover, was that the piece should be something that couldn’t be created on the computer. I wanted it to be expressly “a painting.” There just seems to be so many great up and coming artists working digitally that I don’t even want to compete with them, so my answer is to create a something that is wholly original and difficult to do digitally. So, in this piece that is evident in the sky. The washes, upon washes are ripe with accidents and recoveries { I’ll leave it to you to find those! } I found myself thinking a lot about the skies in pieces that I’ve seen by Sir Russel William Flint. While I wasn’t directly looking at his work, it is strange to me that it would just emerge that way.

As with any piece of work, in hindsight I look back and see areas that could be stronger, but that is what the next piece is for! Stay Tuned, and thanks for reading along.