Now we’ve come to the end of week 4 of the 12 week challenge. Arguably, we’ve entered the “fun” part of illustration, making images!

Before I move on to the painting, I have to say that part of this challenge for me has been about zeroing in on what I want to do, who I’d like to purchase my works, and how I can make a business of doing this. After looking at some of the other challenger’s works, I have to say that I am at once, both terrified and filled with the “I’m not worthy” thing and, greatly inspired. This, of course is part of the inner, personal challenge. To be able to find my own self worth in the presence of other talented artists may be one of my biggest obstacles. Illustration is unique in this way, where we can find ourselves cheering on our friends while challenging them, and in return to be challenged by their now stronger works.

Now, here’s the story of the painting! As some of you may remember from the earlier post “Alien Moon Phases,” recently a friend of mine finished writing a fantasy novel, “Velor” which is looking for a publisher. In order to create a more positive and appealing property he decided to commission a few pieces of work from me.

This is will be the cover image for the book, so we talked about some of the key concepts that he wanted to represent his story. High on the list were feelings of ambiguity, of being lost, and that kinda the main character in the story is the journey it’s self. After discussing some key scenes in the book, we arrived at a moment wherein the band of travelers is lost in a mountain range and decide to take shelter in a cave. 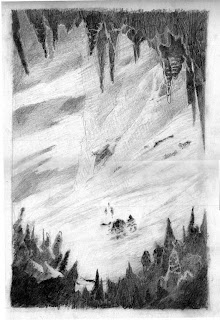 After a few thumbnails, we liked this drawing. The characters were ambiguous, the mountain is big and they are small, and the cave is threatening while offering shelter. I wanted this to be a “frying pan to fire” scene. 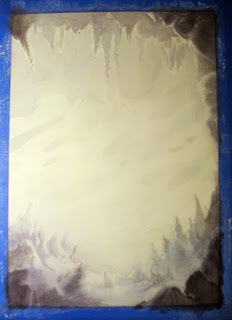 Moving right along, this is the first image that I took after the first washes were laid down. As a technical note, I tried some new paper, an Arches 260lb hot press. In the store I liked the plate finish which seemed smoother than the 300lb paper, but not as slick as the Strathmore 500 series that I had been using. I thought I’d just give it a go. The paper was stretched, it was kind of attached to a board {wet paper and tape don’t mix so well, I guess that’s why everybody else uses thumbtacks… lesson learned,} and we’re off to the races. 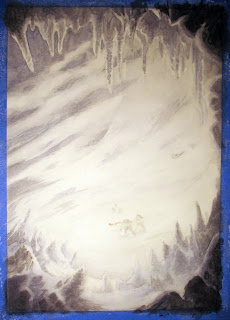 These early washes on the page were really fun to work with. One simply cannot know the difficulty in painting “white” in watercolor. It actually turns out to be a study in shades of gray, but such is the story of my life!

After that point, I got really busy painting and didn’t take anymore process pics, but somehow I ended up with the final painting. 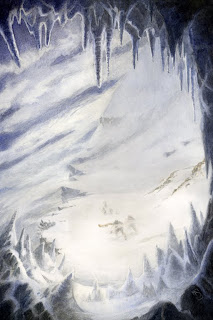 All, in all I am happy with the image. I find that the compostional tool of using a spiral to bring the eye into the center is a lot of fun to work with, and that the over all effect of weather and light has come across to an acceptable degree. There are some nit picky things that, if I had to do this over again, I’d do differently, but in the end I am generally happy with the piece.

As for the new paper experiment, in the final stages of painting, the paper really started to buckle and warp from the numerous washes that I was applying. Looks like it’s back to the Strathmore board, and the challenge of creating soft edges on it, and I’ll have to save this paper for simpler works.

During the whole process, serendipitously I discovered a book “The Great Age of British Watercolors 1750 – 1880, and I was totally blown away with the works there. These guys were creating amazing realism in their watercolors as well as a great sense of mood and atmosphere. I didn’t like everyone’s work, but some stand outs are John Sell Cotman, and some lazy bum named Joseph Mallord William Turner. I could rhapsodize about their merits for quite some time, but suffice to say that these are some real solid building blocks in watercolor painting.

To summarize about the painting and the 12 week challenge, we are supposed to create 2 pieces a week. Realistically this is pretty much out of my reach, as I want to bring up pieces to full paintings, but that doesn’t mean that I’ll do anything but my best to create as much as I can in the next 3 weeks.

Stay tuned, I’m not exactly sure what the next painting will be, but there will be one and I hope that you’ll be around to offer your comments and critiques!

PS: Links to stuff referred to in the post;
• the earlier Velor post: “Alien Moon Phases” ( which has a fun little video too! )
• the book: “The Great Age of British Watercolors” { and as ever, support your local book stores when you can! }
• John Sell Cotman { wiki-page } how have I not know about this guy?!
• JMW Turner { wiki-page } as a note, I knew he was good… but, wow.
• other 12 week challenge posts { here }