After sitting on this for a while, life’s cleared up, and the next project is up and running. A friend and I have worked out a story, and developed it for release as a comic. And by developed it, I mean that he’s written the darn thing, and now I need to deliver the art! Our objective with this project is to have a bit of fun, we’re both comics fans, and decided that we’d give it a go. The plan thus far is to produce a sample of the work, and then approach a few different publishers, to see if they are interested, and if that fails, there’s always self publishing.

After doing considerable thinking on the matter, the cover is going to be the first thing, then I will work out the pages. So, with out further ado, or a-doo-doo…

Part of my intent with this cover painting is to keep things quick and loose. I feel like often by the time a drawing makes it to the final board, a lot of life has been wrung out of it through tracing. So, I’ve intentionally left this one looser.

First a few free-hand color comps. I really like the earth tone pallet, but after some consideration, I started thinking about James Bama’s Doc Savage covers, images here, I like the tone of his images, he pulls a hue as the major key for his images. Which I thought would work better for a comic cover ( I do actually want people to buy this after all!) 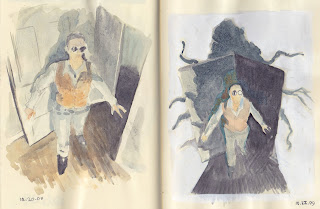 I started working using white to knock back the background. The image below was started with a wash of orange, then knocked back with chinese white. There’s an intentional halo around the edge of the shadow and figure, my hope is to create a little edge vibration, especially between the blue shadow and the orange edge. 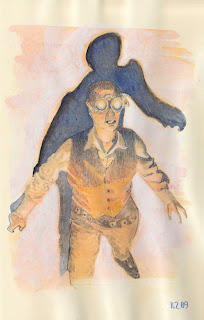 Now, the drawing is on the board, and at least one thing has changed from the preliminary drawing, notice the tentacles along the bottom edge, which I am seeing as being in the foreground. I think they help to really emphasize the danger that our heroine has walked into.
I’ll apologize now for the quality of the photo, it’s just a snap shot that I bent around in photoshop to get the lines to show up. 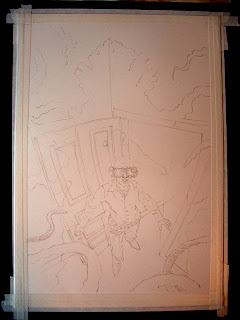 *This piece has been finished! You can read the final blog post you by going { here }, but if you are interested in following along with the process posts you can read the second blog post { here. }

One Response to Goggles Comic: Cover on Board